How Stack Focus Reveals What the Eye Often Misses

Stack focus, which is also often referred to as focus stacking, is a technique that produces close-up images of depth and detail beyond that seen in conventional close-ups. 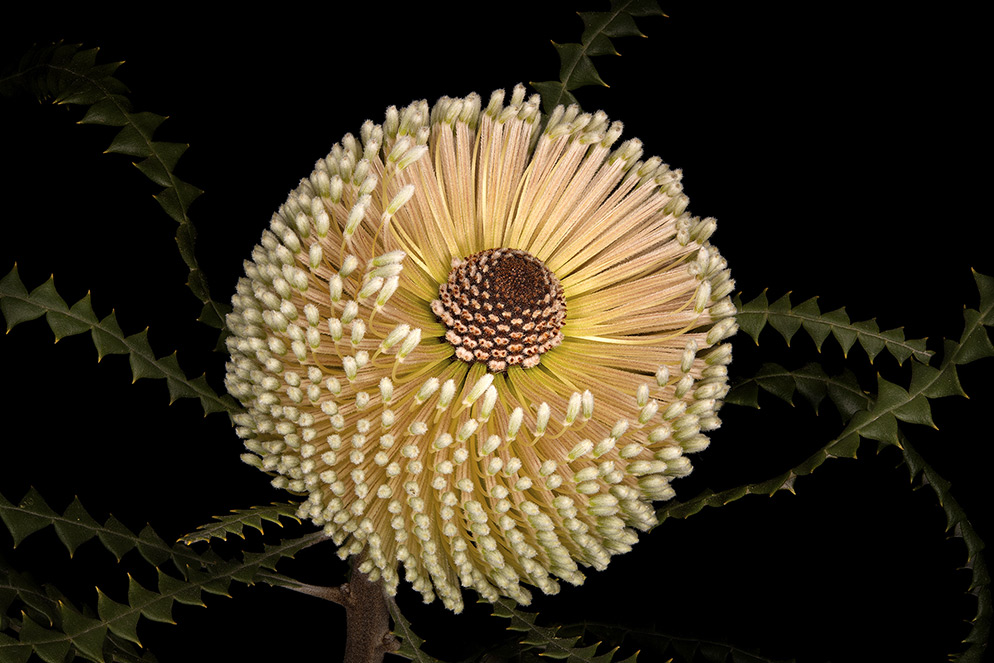 © David Leaser
Banksia speciosa, commonly known as the showy banksia, is a species of large shrub or small tree. In Photoshop, David dodged the background to reduce the effect of the flash on them—”I wanted them to have dimension, but not brightness,” he says.

What stack focus does is extend depth-of-field in macro photography, and if you’re not familiar with the technique, you might wonder why you’d want to do that. You could set f/11, f/16 or f/22 and get a great deal of depth-of-field. Stack focus, though, is a totally different approach and a means to an end beyond familiar close-up images. 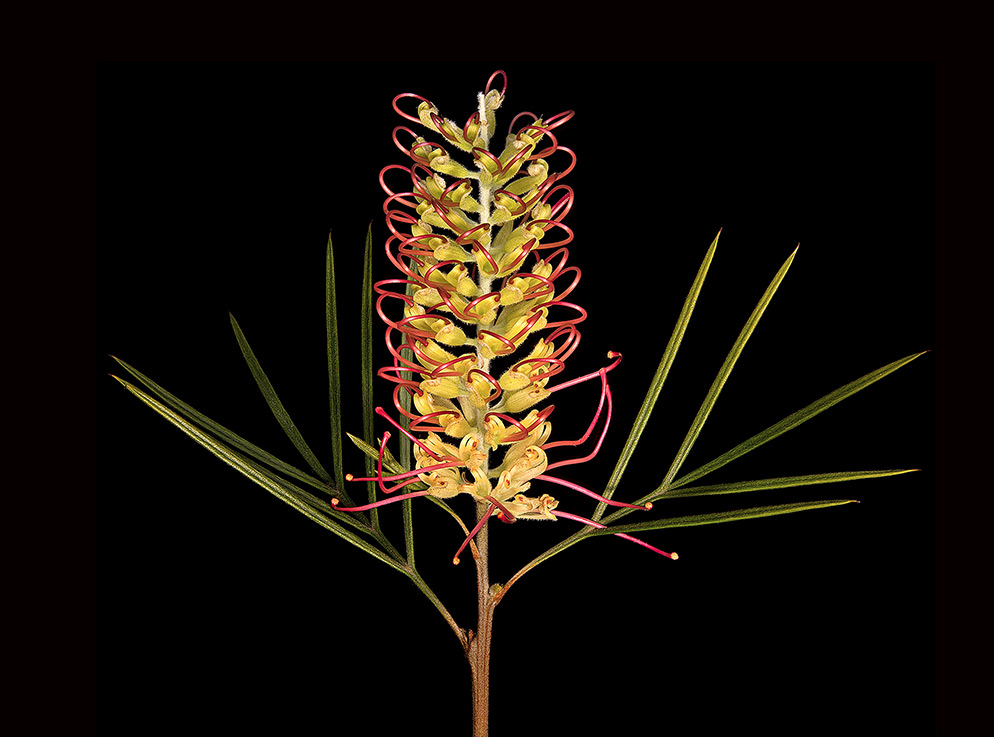 © David Leaser
Grevillea is a diverse genus of evergreen flowering plants. “The red stamens started to open through the process,” David says, “but fortunately there was no motion recorded in the images.”

About ten years ago, while shooting landscapes in the Amazon, David found himself captivated by “the tiniest of living things on the rainforest floor,” including the smallest of flowers. Realizing that even the best close-up lenses couldn’t get the depth-of-field he could see in these flowers, not to mention the details even the eye often misses, he started experimenting with stack focus photography. What he wanted to capture and share was “a bee’s-eye view of nature,” and focus stacking was the way to do it.

When he first used the technique, he’d mount his D3X and 60mm Micro NIKKOR lens on a motorized rail device that would move the camera and lens toward his subject at preset intervals. The system did the job: the rail moved the camera and lens, in precise increments, closer and closer to the subject, taking pictures at each interval, with each image capturing a different area of focus.

Today, David uses the D850 because whether you call it stack focus or focus stacking, the capability is built into the camera. (it’s also in Nikon’s full-frame mirrorless cameras. With the new Z 6 and Z 7 mirrorless cameras, focus shift shooting adds a new feature called “Peaking Stack Images”. This feature, when turned on, will employ focus peaking to create a black-and-white preview stack that can be used to check focus after shooting.) The D850’s stack focus feature moves the elements in the lens; the camera itself does not move. The advantages over the rail system are fewer moving parts, fewer settings, less gear to carry when shooting on location and no need for power cords or batteries for the rail.

“The results I get with the D850, considering my concern for the art of the process and the ability to communicate what I see, are equal to the rail system results,” David says. In fact, in one respect the results are better because turning lens elements rather than moving a camera reduces or often eliminates a parallax problem the stacking software had to contend with. (Parallax, in photography, is the difference between a subject seen through the lens and the way it’s captured by the sensor. The difference occurs most often as the lens moves closer to the subject.)

Using the D850 means the process of taking the individual pictures that will comprise the composite is pretty much automatic. But it’s not push-button automatic—there’s equipment to set up, menu selections to make and test shots to take. But in David’s view, that’s where the creative part of the process comes into play.

If you’re interested in creating your own focus stacking photos, or if you’ve been doing it using the motorized rail system and would like to simplify the process, here’s how David gets it done. 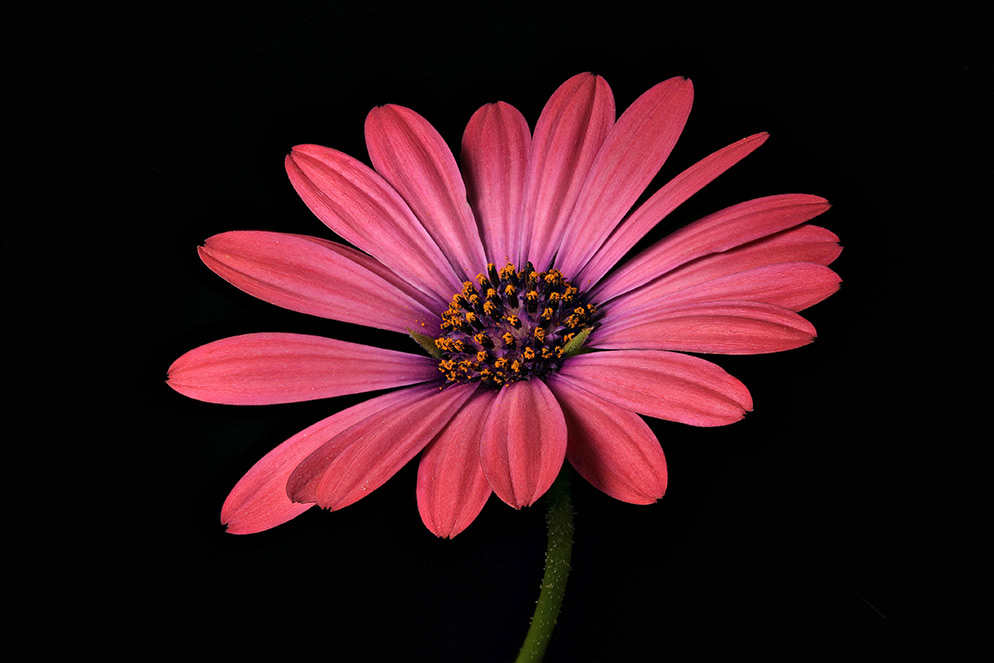 © David Leaser
Osteospermum, known as the African daisy, is a genus of the sunflower/daisy family. “This image is one of the collection created at the Huntington the first time I photographed with the D850,” David says.

And one more thing. If you’ve seen the pictures accompanying this article, you’ve probably realized that the most important factor in their creation is light. More precisely, the control of light. 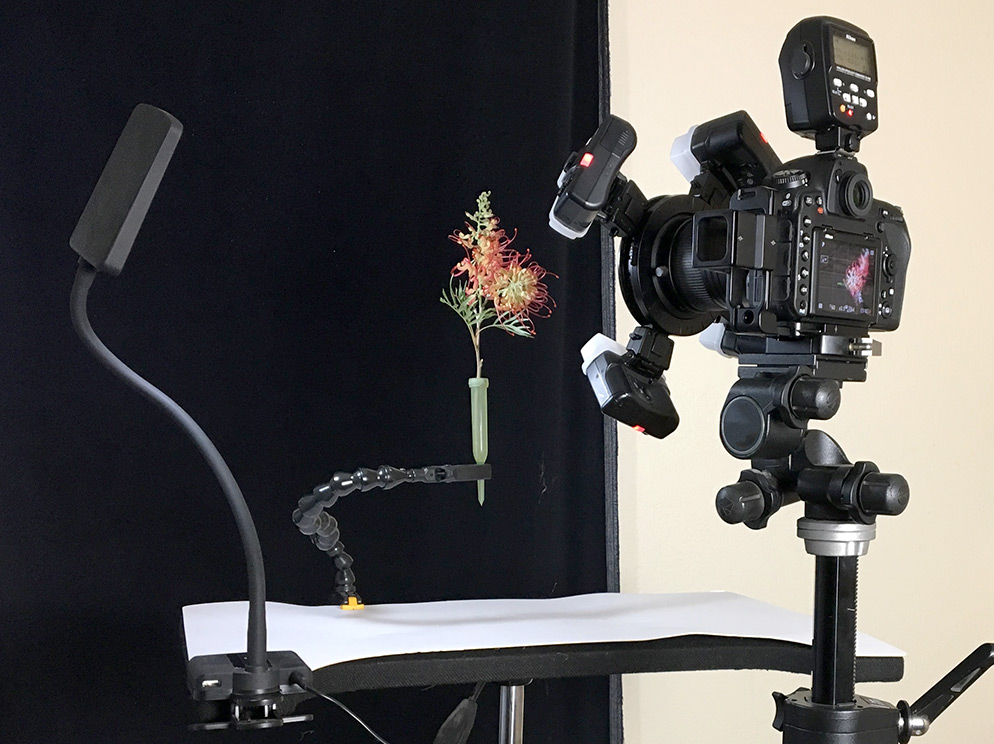 David Leaser’s home studio setup with the D850 and 60mm Micro NIKKOR, SB-R200 Speedlights and the SU-800 Commander in place. Note the LED modeling light at left, clamped to an inexpensive tripod, which he uses during focusing, then shuts off before photography begins. He uses Wimberley PP-200 plant clamps “to keep the plants steady and position with precision,” and floral water tubes for single stem cut flowers to keep them hydrated. All the photos with this article were taken with the D850 and the AF-S Micro NIKKOR 60mm f/2.8G ED lens at 1/60 second, f/8 and ISO 64.

Everything is controlled from the camera, and getting the camera into stack focus mode is pretty straightforward, though you’ll want to check the D850’s manual, too.

First, access the camera’s Focus Shift Shooting menu, which will offer settings for step width, the number of shots and the time interval between shots. Step width controls how far the lens elements will move to photographically get closer to the subject; David selects 3 from the scroll menu. Next, you’ll select the number of shots the camera will take for your composite; David typically chooses from 50 to 125 depending on the size and depth of his subject. Selecting the time interval will determine how much time will elapse between shots. “That’s important because the flash units recycle very quickly, but you do have to allow for that,” David says. He sets that menu to 00, which is the default for five-frames-per-second. 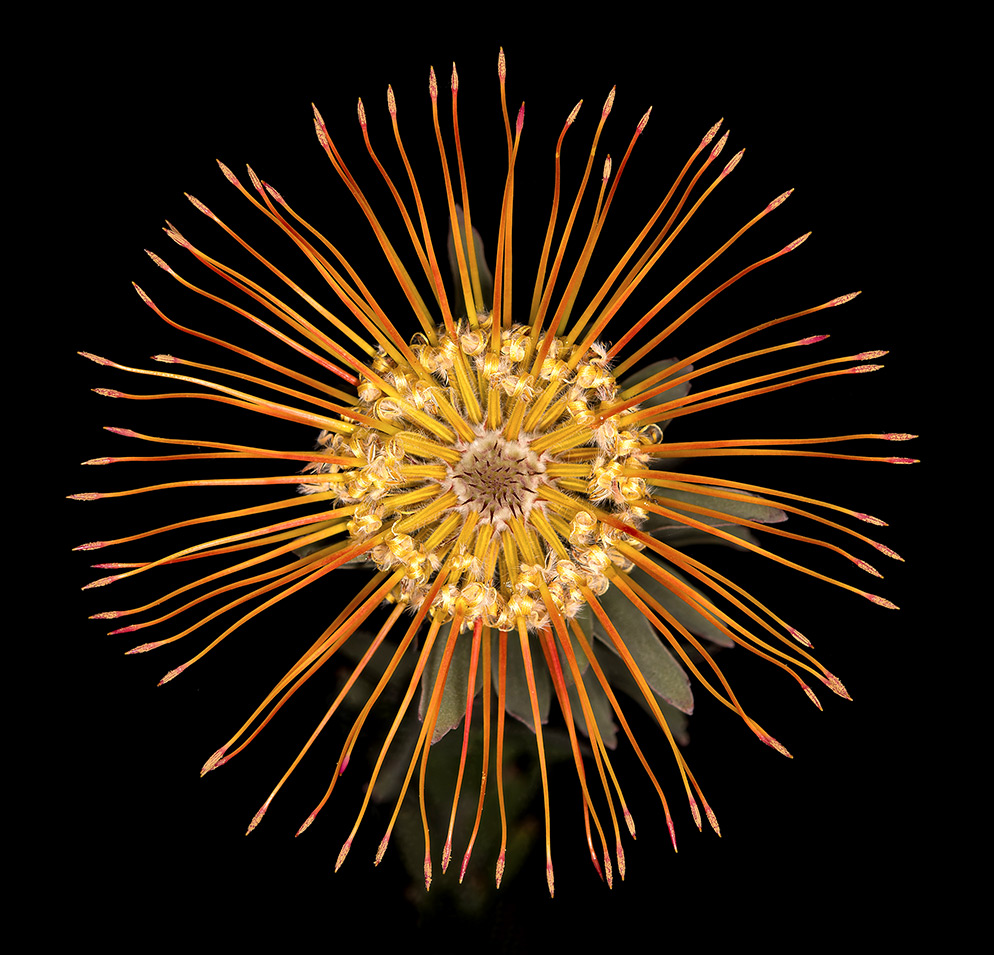 © David Leaser
A Goldfinger pincushion protea flower, a genus of South African flowering plants, sometimes also called sugar bushes. David didn’t use the entire stack of images here because the green leaves behind them looked so distracting he deleted the last images in the stack—the sharp frames—leaving the early blurry ones to soften the leaves’ overall effect in the photo.

Here are some of the things David’s learned along the way: 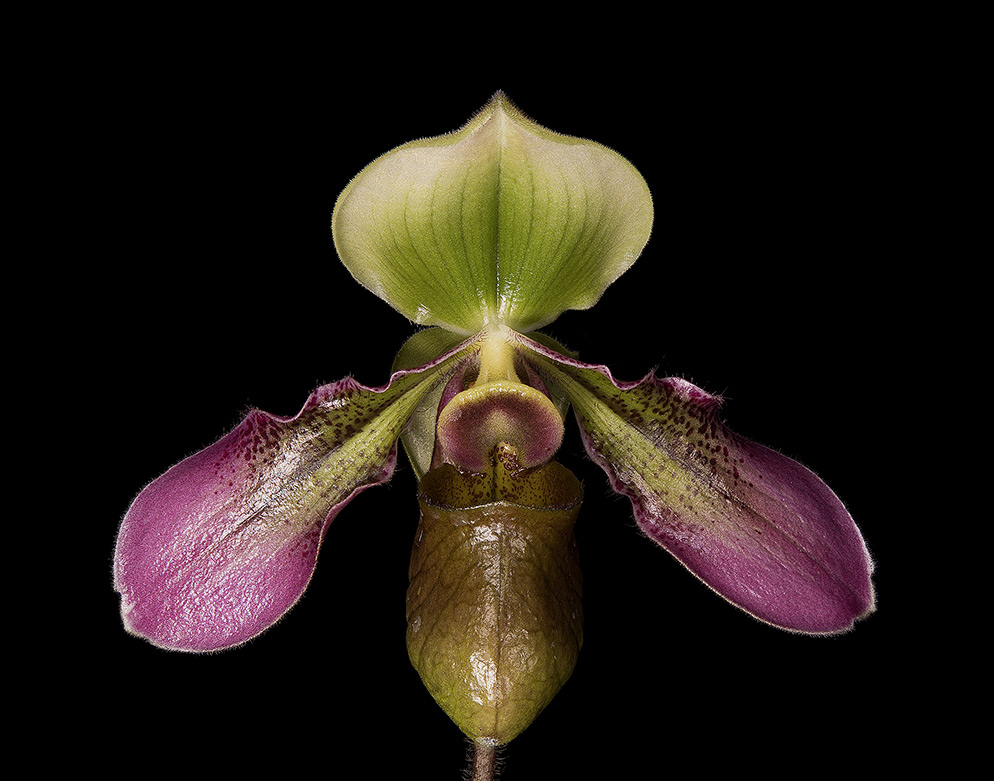 © David Leaser
Paphiopedilum hookerae, commonly known as a slipper orchid, is a species endemic to Borneo. “I particularly wanted to see how the D850 would capture and display details, but since it was the first time using the camera, I didn’t expect to produce images I would add to my portfolio. But I realized I’d been able to do both: show the detail the D850’s stack focus technology can achieve and capture images of nature which move me—and may move others.”